Oryx is the genus of the oryx, an elegant antelope perfectly adapted to life in the driest deserts of Africa and the Arabian Peninsula. Sahara oryx is probably extinct in the wild and Arabian oryx is extinct in the wild since the middle of the last century. In recent years, thanks to the reintroduction of isolated animals from zoos, small wild populations of these two species have been recovered.

When in 1996 we conceived the idea of ORYX, The Nature Lover's Shop, we chose the name of this beautiful animal because it is representative that thanks to the conservation effort of our society, we can get back to nature a seriously threatened species.

Description of the different species of oryx in the world

Taxonomy: Oryx is the generic name to four species of antelopes, which are characterized by inhabiting desert or semi-desert areas of Africa and the Arabian peninsula and for having very long, thin horns. The scimitar oryx (Oryx dammah), the East African or beisa oryx (Oryx beisa) and the Cape or Gemsbok oryx (Oryx gazella) are the three species typical from Africa. The Arabian oryx (Oryx leucoryx) is the only one that lives on the Arabian peninsula.

There are three subspecies of the East African oryx that some authors consider to be differentiated species: Oryx (beisa) beisa, Oryx (beisa) callotis and Oryx (beisa) gallarum. 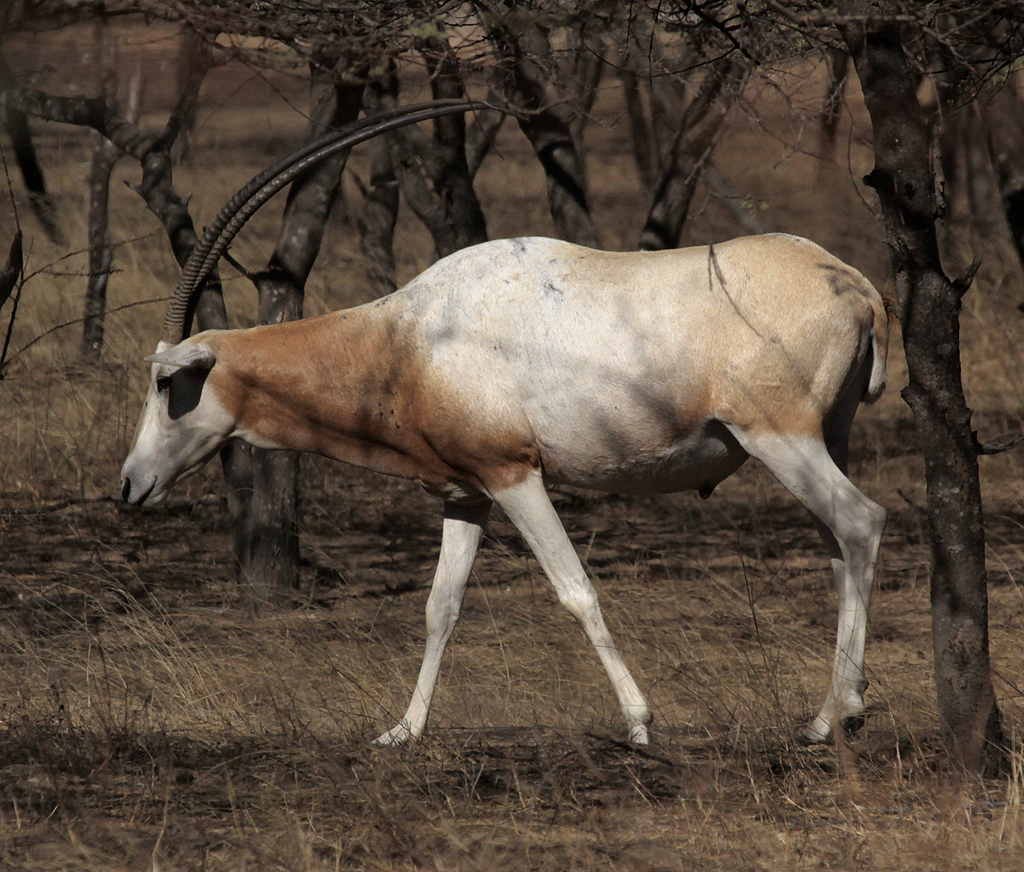 The scimitar oryx was distributed throughout most of the Sahara desert and the northern Sahel, but is currently considered extinct in the wild. Until 1985, it was estimated that there were about 500 individuals between Niger and Chad, but a few years later, only a dozen individuals were detected south of the Ennedi Mountains. Since 2000 there is no reliable evidence. Hunting and human pressure in the Sahel region have been the cause of its extinction.

Nowadays, there are herds in captivity or semi-captivity in Tunisia (Bou Hedma N.P.), Morocco (Souss Massa N.P.) and Senegal (Guembeul reserve) from which reintroduction could begin. In fact, in Senegal, the release of animals to the Sahelian reserve of Nort Ferlo has already begun.

DESCRIPTION
It reaches 1.25 m high at the withers and can weigh from 150 to 200 kg. Horns are 1 m long and are usually parallel and curved in the shape of a scimitar, and they are ringed. Those of the females are longer and finer while those of the males have a larger diameter.  They have a brownish color in the neck, chest and a thin longitudinal band to the low part of the flanks. The rest of the body is white.

HABITAT
The scimitar oryx inhabited the sub-desert areas of the Sahel and North Africa, entering the Sahara during times of less heat, when they can find some more food. In the hottest times they seek the shade of the acacia trees.

FOOT HABITS
Grasses of the genera Panicum, Aristida, Cenchrus, Chloris, other leguminous herbs and this oryx has a special predilection for wild melons of the genus Citrillus for their high water content.

BIOLOGY
Like the rest of the antelopes in the desert, it is able to survive long periods of time without drinking since it makes extraordinary use of the water it gets from food. They live in herds of 15 to 30 individuals with a dominant male, often quite aggressive. They usually have just one calf after 8 months of gestation, usually at the end of winter. The only predators that threatened them were lions and licaons or wild dogs despite the fact that the premature extinction of both predators in the entire Sahel region has made that their only enemy they had, certainly the most dangerous, was the human. 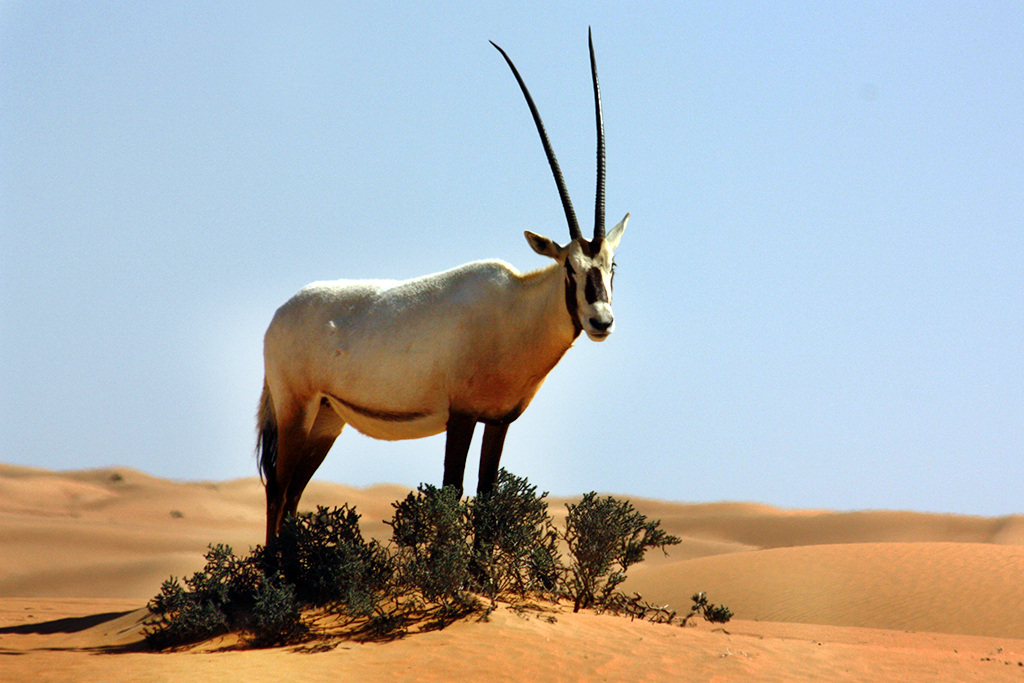 The Arabian oryx was distributed throughout almost the entire Arabian Peninsula to Kuwait, Iraq, Jordan and Sinai. At the end of the XIX century it began a continuous decline due to hunting. Towards 1920 the population was divided into two, one at the north separated by more than 1,000 km from the southern one. Towards 1950 the northern one was extinguished. Oman has been the last country to retain original wild populations of Arabian oryx until the early 1970s.

Thanks to various reintroduction programs based on animals from zoos, it can now be considered that there are wild populations in three states, one in Oman, in the Arabian Oryx Sanctuary; two more in Saudi Arabia, in the Mahazat as-Sayd Reserve and in the Uruq Bani Ma'arid Reserve; three more in the Negev desert, in Israel and also in the United Arab Emirates and in the Wadi Rum, Jordan. Nowadays semi-free populations are maintained in Jordan, Syria, Bahrain, Qatar, etc.

DESCRIPTION
The Arabian oryx is the smallest among them, measuring 1 m high at the withers and weighing about 70 kg. The horns, straight and pointed, can measure between 50 and 75 cm long. The hair is white except for the tail, the lower part of the belly and the legs which are dark brown. They have a vertical black spot where the head joins the neck with an extension towards the eyes, a triangular one on the forehead, just between the horns, and another from the forehead towards the muzzle.

HABITAT
They prefer stone deserts and areas between dunes, that are harder, allowing them to get away faster when threatened.

FOOD HABITS
Arabian oryxes are able to detect at great distances where it has rained and are directed to feed on grasses that are temporarily growing. They can also feed on trees and shrubs, roots and fruits, but in some studies carried out in Oman it has been found that the flowers and leaves of plants of the genus Spiragrostis are the most frequent food. They can take weeks without drinking water.

BIOLOGY
They live in herds of 10 or more individuals with more than one male and several females. A hierarchy is established between them and they roam the desert looking for the scarce pastures they find after the sporadic rains there are. They only reproduce when the environmental conditions are favorable.

Spotted hyenas and wolves were their main predators. The Bedouins also hunted them, but with the arrival of oil exploitation, the means used to hunt them changed radically until they became extinct. 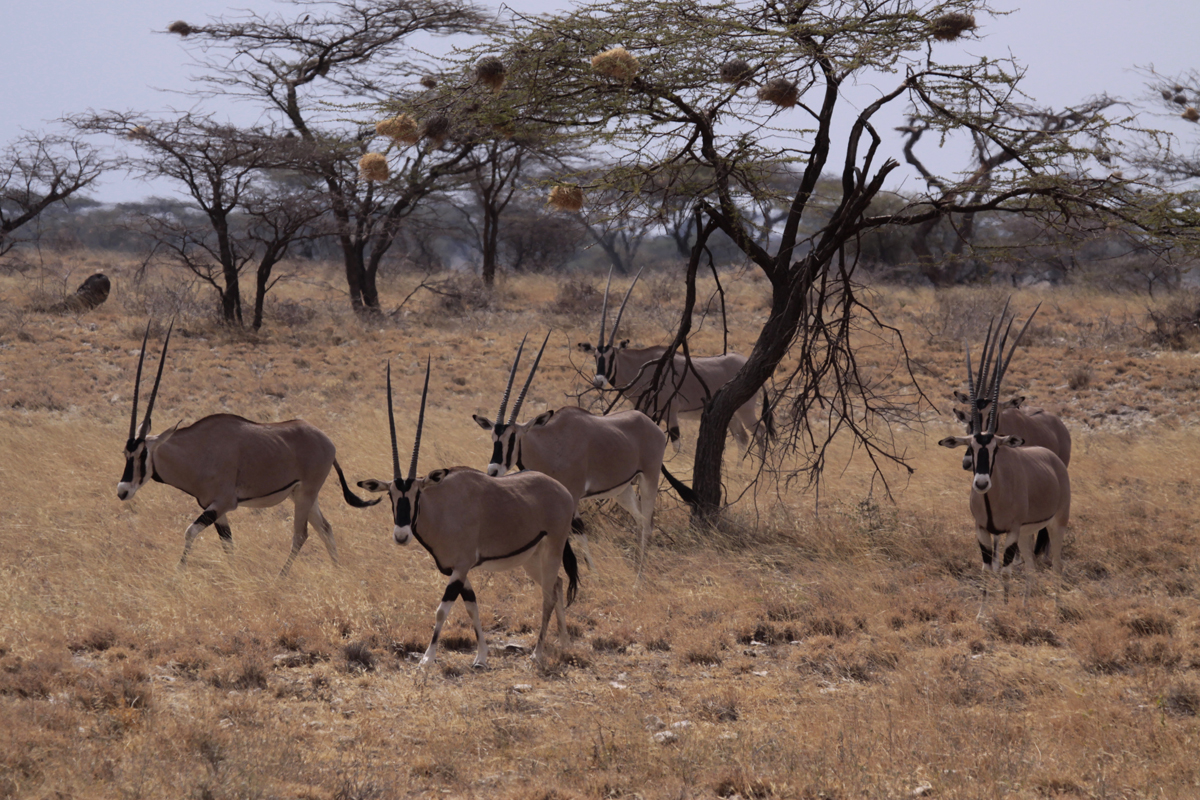 DISTRIBUITION
From the shores of the Red Sea in Djibouti and Eritrea, part of Ethiopia and Somalia, west to southern Sudan and northeast Uganda, Kenya and northern Tanzania. It is likely extinct in Eritrea and Uganda, and its populations have been greatly reduced in Sudan, but it is still relatively abundant in Ethiopia, Kenya and Tanzania. The current populations are considered to be around 70,000 individuals, almost ¾ parts located north of the Tana River, corresponding to the beisa subspecies, while the rest, those of central Kenya and northern Tanzania, correspond to the callotis subspecies. Recently it has been considered a further subspecies: Oryx beisa gallarum distributed in south-eastern Ethiopia, Somalia and north-eastern Kenya. Some authors consider them as three different species.

DESCRIPTION
They are the same height, but more corpulent, than the scimitar oryx, 1.25 m at the withers, and weighs from 120 to 180 kg for females and 160 to 200 kg for males. Large and muscular with long, straight horns up to more than 100 cm. Body hair is gray-brown except for the paler face, with a vertical black spot across the eye and cheek to the throat from where it extends down the neck like a line. On the forehead, between the two horns, it also has a black spot and another one connected by a line to the previous one, above the muzzle. At the edge of the flanks it also has a black line, the end of the tail is black and finally it also has two more spots on the legs. Of the three subspecies, the most different is callotis, which is more brown or beige in color, ears ending with a tuft of black hair and has a narrower black line on the flanks. The gallarum subspecies has lighter gray fur and finer or blurred black spots.

HABITAT
It is the oryx that lives in less desert habitats since it occupies the arid and semi-arid plains of East Africa, although avoiding areas of higher grass or more closed scrublands. When the rainy season arrives avoid flooded or muddy areas. In Ethiopia they can inhabit as high as 1,700 m.

FOOD HABITS
Like the other species it graze and also browses acacias and bushes or digs up bulbs and roots, especially in the dry season. If it can, drinks water regularly.

They live in mixed herds of several dozen individuals. Hierarchies are established in both sexes. Only a few males can remain isolated. They do not have a specific breeding season. The group's social relations are based on a ritual behavior that begins by spinning around and adopting certain positions with its head raised.

Their enemies are the great African predators: the lion, the leopard, the licaon or wild dog, the hyenas, etc. 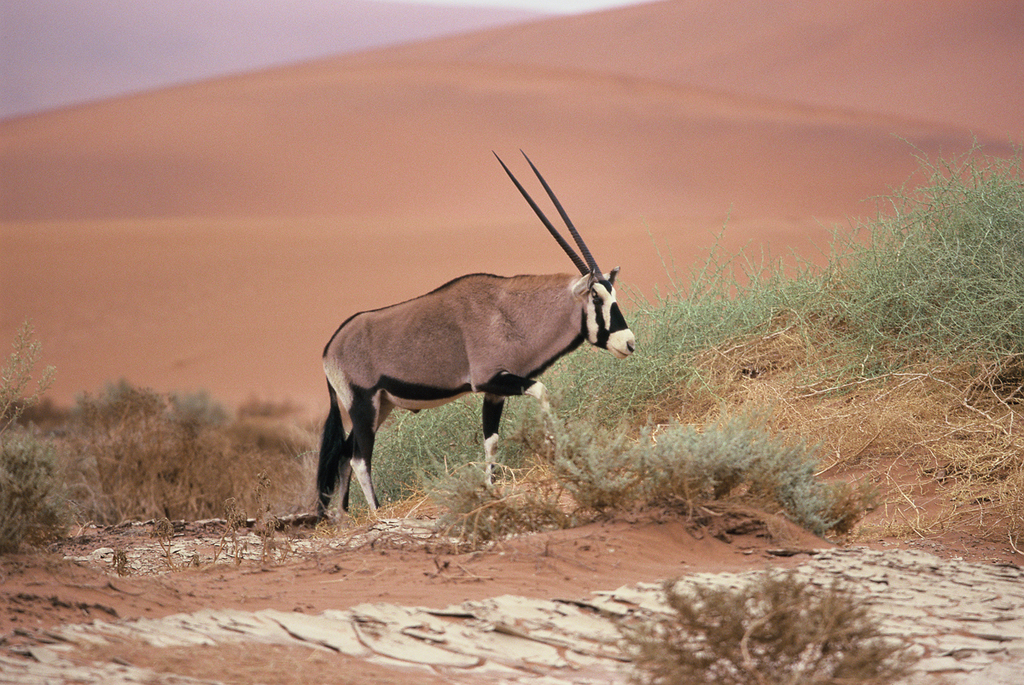 DISTRIBUTION
The Gemsbok was distributed over a very wide area in the southern cone of Africa, from Angola and western Zimbabwe to South Africa. They always inhabit areas with low rainfall, from 50 to 250 mm per year, being the Kalahari desert its most common habitat. characteristic. In the 19th and 20th centuries its distribution has been greatly reduced in South Africa. But more recently, by reintroductions to protected areas and large private farms (often for hunting purposes), both its populations and its distribution have increased. In Angola it is considered extinct.

DESCRIPTION
It is the highest, 1.35 m at the withers, and heaviest oryx, from 180 to 225 kg for females and 180 to 240 kg for males. Large and muscular, with a wide neck and long, straight horns of up to 120 cm. The hair of the body is light brown or beige, but the face is white and contrasts a lot with the black spots that it has on the nose, surrounding the muzzle, from the cheek to the eye and the chin. It also has black spots on the top of all four legs, on the edge of the flanks, on the rump and tail.

HABITAT
It lives in desert habitats of the Kalahari and in bushy areas or with scattered trees in the Karoo and in other peripheral areas of its distribution area. They migrate between different areas to take advantage of new pastures.

FOOD HABITS
Like the other species they graze and also browse trees and shrubs or digs bulbs and roots, especially in the dry season. They are very resistant to droughts and are capable of digging in the bed of dry rivers looking for groundwater.

They live in mixed herds of several dozen individuals who lead a more or less nomadic life led by the females of the group. Only a few older males can remain isolated and more sedentary. They do not have a specific breeding season. Relationships are more complex than in the other species and are based on ritual behaviors with movements of the horns, spinning or walking in parallel and adopting certain positions with the head raised. This species is considered to be less aggressive than the others.

Their enemies are the great African predators: the lion, the leopard, the wild dog, the hyenas, etc.